Quarry Life Award in your region?

The Richness and Diversity of Soil Arthropods For Succesful Reclaimation in Gaskell Sand Quarry
Sat, 18/08/2018 - 16:58

Schizocosa mccooki
Schizocosa mccooki (Montgomery, 1904) is a medium sized wolf spider common throughout the western United States. Its reported range is from southern Canada to central Mexico, from the Pacific Ocean, east to mid-Texas and in the northeast, to Michigan (Dondale and Redner 1978). Dondale and Redner (1978) describe S. mccooki as abundant, widespread, and variable. S. mccooki has typically been collected by pitfall traps (Allred 1975) or by headlamp collecting, as reported here. The preferred habitats of S. mccooki appear to be open ground or small desert shrubs in pinyon pine-juniper woodland, in grass and sedge as on the shore of Lake Erie (Dondale and Render 1978), or in dry grassland (Buckle 1972). A brief description of the courtship can be found in Buckle (1972) (misidentified as S. avida) and Uetz and Stratton (1982). ……… (The Journal of Arachnology © 1984 American Arachnological Society) (https://www.jstor.org/stable/3705175?seq=1#page_scan_tab_contents) 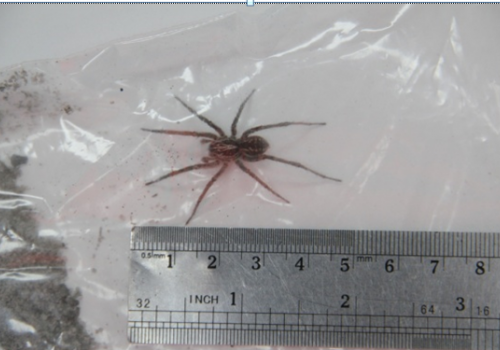